EQUIP GRIT washer is used for the separation and cleaning of sandy material from wastewater. These machines consist of a conical decantation hopper, provided with an agitation system that give to sandy waste water a rotational movement; this rotation facilitates the sedimentation process and, at the same time, keeps in suspension the organic matters.

The hopper’s bottom is fed with clean water that creates a counterflow that removes the organic material which is then evacuated from a pipe placed at the upper side of the hopper. The washed sands are removed from the bottom of the hopper by a shafted screw conveyor, while the output cleaned water outflows from a pipe placed at the top of the hopper. The water enters the hopper through the inlet scroll; the volume is kept in motion by the agitator central that a rotational movement, whose purpose is to facilitate the sedimentation of the sand and at the same time to maintain suspension of the organic material.

The sand, on its way towards the bottom is further washed clean water fed in countercurrent, to then be extracted from the cochlea. The water countercurrent also has the task of facilitating the ascent of the organic substances, that are then evacuate at regular intervals by a special exhaust pipe. The clarified water is instead evacuated by a second conduit placed in the upper part of the conical hopper. The constant rotational motion of the water mass allows the sand to pass from the hopper to the discharge screw, which conveys it to the exit.

Trough Protection with HDPE liner for the screw 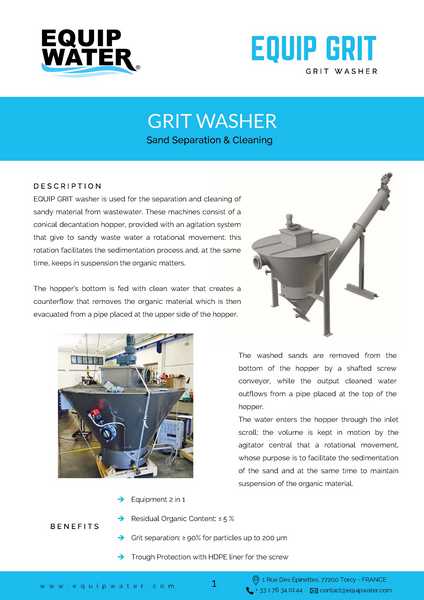